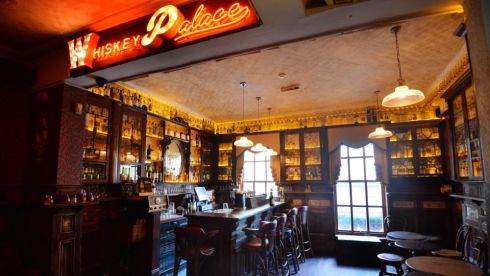 It is 125 years since Dublin had its own distillery but the Teeling family are changing that. Working alongside them in the renewal of Dublin whiskey is another famous family, the Ahernes, who bought the Palace from the Widow Ryan in the late 1940s.

William Ryan came up from Tipperary and started bottling his own whiskey on the premises, a common enough task at the time. His son Liam took over in turn and now Liam’s son Willie has played his part by reinventing the upstairs lounge into the Whiskey Palace, a purpose-designed whiskey bar steeped in history and nostalgia.

The shelves and cupboards are stacked with the best Irish whiskeys in the world but it’s the return of the Palace own label that has captured people’s attention. A single malt known as the Fourth Estate that features a former editor of The Irish Times on its label stands proudly beside a wonderful nine-year-old and a fantastic 14-year-old (itself married with a 21-year-old).

It is a steady coupling and far from the blends that characterised whisky drinking of old. Nowadays Ahern loves to pitch whiskey to new arrivals on the scene and points them towards single pot stills. He was a fan of Yellow Spot before it was common on Dublin shelves and is a great fan of Teelings. Writers Tears from the Walsh Distillery is another great whiskey that deserves mention, he says, and a brand that has its world market firmly in sight.