This tasting was organised by Caroline O’ Dowd, Dublin Institute of Technology, Bolton Street & Member – Irish Guild of Sommeliers. Thanks to Caroline for all her hard work in organizing this tasting.

Dr.Sandro Boscaini hosted an excellent wine tasting of Masi wines for members of The Irish Guild of Sommeliers at the United Arts Club on Wednesday the 5th October,2011. 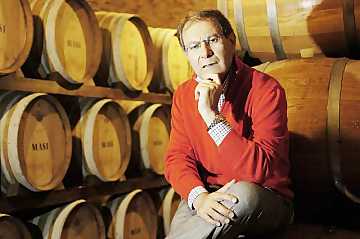 At the end of the tasting Sandro was presented with a bottle of “The Palace Bar 9 Year Old Single Malt Irish Whiskey” by Guild President Mary O’ Callaghan.

The following tasting notes were written by Liam Campbell of the tasting committee and organiser of the Masi tasting.

Pinot Grigio as a varietal style has enjoyed incredible success overseas as an alternative to oaked Chardonnay.

The estate was acquired in 1353 by a Judge who was the son of the poet, Dante. “Possessioni” means “estate” in an ancient Venetian dialect.

Varietals: Corvina and a very special clone of Molinara which has a greater depth of colour and intensity of fruit is named after the estate: Serego Alighieri.

Ripasso, the richer style of Valpolicella uses the still-warm pomace from racked young Amarone added to Valpolicella’s fermenting grape juice.  This addition increases tannins and fruit to allow for long aging and greater flexibility with food.  The Ripasso method was devised by Sandro Boscaini’s father to compete with the popular fuller-bodied and richer styles of Chianti Riserva and Californian Cabernet.  The Campofiorin 1964 was the first vintage of this expression of the Ripasso method.

Subtle and reserved aromas of mossy and raisiney fruit.  Delicious and complex on the palate with a graphite minerality from the single vineyard’s soil underpinning the dried cherry fruit with herbal sage notes.  Typically full-bodied with a spicy paprika finish.

The Amarone classification started in 1941.

From the sloping single vineyard, Vaio Amaron the terraces are supported by dry stone walls and limits production to produce concentrated fruit.

Medium pale mahogney colour, tawny at the rim.  A complex and mellow bouquet of dried tea leaves and tobacco. Dried fruits and still sprightly acidity with the alcohol concluding on the finish.

Amarone does not need tannins to help it age.  The combination of the elements of concentrated fruit from dried grapes, the high acidity and the high alcohol all combine to make Amarone an age-worthy wine.

Amarone is derived from Appassimento, the ancient wine-making method of drying grapes where the best bunches of grapes are laid on bamboo racks late Sept. to early Oct. in the lofts.  Large opened windows provide natural ventilation to avoid humidity and possible rot.  By five to six months the dried grapes are pressed and slowly fermented for about fifty days.  When all the copious sugar has been fermented to dryness, the wines undergo a malolactic fermentation to reduce the high acidity levels.

Sandro Boscaini is the current president of iconic Italian wine producer Masi and widely credited with being the unofficial spokesman of the Veneto, the historic Italian wine region which covers such iconic wines such as Amarone, Valpolicella, Bardolino and Soave. He is the sixth generation of the Boscaini family to be involved in winemaking and an established and respected figure in the world of Italian wines.

Staunchly rooted in his Venetian upbringing and the history of the area, Sandro nevertheless is an incessant innovator: while constantly exploring the potential of the Veneto region through rediscovering and cultivating ‘lost’ native grape varieties such as Oseleta, Sandro also experiments with oddities such as square barriques, sandlewood and cherrywood barrels, applying ancient Venetian techniques to the New World, and much more. Such pioneering work led to Masi establishing in the early 1980s what is now known as the ‘ripasso’ technique, which today is emulated by many throughout the region.

This paradoxical outlook is manifested best in two philanthropic movements established by Sandro in recent years: The Masi Foundation, which funds and awards Venetian locals for their contribution to the cultural heritage of the area, and the Masi Technical group, which engages in on-going scientific research into all aspects of wine production, from soil to glass, involving collaboration and sharing research with leading Italian universities. Sandro has also been instrumental in the establishment of Vinitaly in the 1960s, and the Amarone Families interest group in the 2000s, the latter which aims to protect the heritage and prestige of the Veneto’s iconic wine style, as well as being the prime mover behind leading promotional bodies abroad such as the Istituto Grandi Marchi (‘Institute for Leading Brands’) and ‘Excellence from Italy’.

Masi’s wines are the tangible result of Sandro Boscaini’s  love for both tradition and evolution, where the passion for a place and its advancement shine through in every glass.

Findlater wine and spirit group are agents in Ireland for Masi Wines and they supplied the above wines for this tasting.